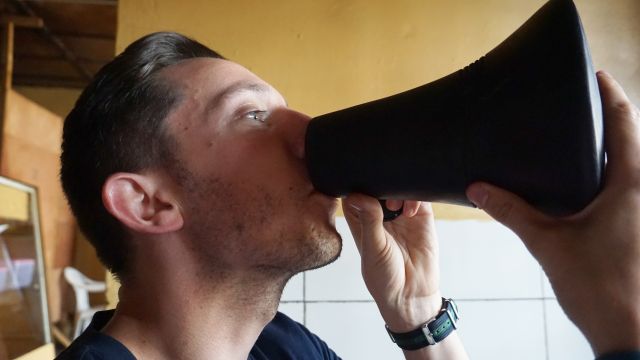 She and I sat side-by-side in plastic chairs in a circle of eager faces watching us. On the floor two women sat with three black gourds. Each gourd had a decorative, woven top; inside, one had yogurt in one, the other, milk.

She went first, holding the gourd by the bottom. We both laughed, a reaction to the moment, to the settings, to their expectation of how we’d find this milk (what’s pasteurized?) and the eyes and the silence and being in a milk bar.

No sooner had she finished her sip came a flood of questions about flavor and texture, acidity and sweetness. Then it was my turn. This yogurt (which was day-old, or rather, day-aged, milk) was only a touch sour and more palatable than any greek yogurt. Later we’d hear that if the cow had actually been from the village where she gets to roam and eat grass all day, the yogurt would have been even better, even richer. If that’s not a pitch for Whole Foods, what is?

Thinking the circle, and the gourds, and the presentation were ceremony enough, we looked around with the expectation that our time at the milk bar was over.

Then they lit the fire.

I have regular doubts about this summer, and the choices that led me here. I wonder whether this time could’ve been spent doing more of what I’ve done before, or should’ve been spent with her, or trying another thing.

But the decision is made, and I am here. Though no international trip is complete without a panicked look at what change fees would cost me to return home, I know that’s not the answer.

The answer, I’ve found, is in asking “Why not?”

If I feel cooped up here, why not go to a strange new place for dinner?

Why not have Ethiopian food and talk about relationships?

Why not try my hand at redesigning the logo for a shampoo bottle?

Why not walk the two hours back from the market?

Why not tag along to the lake for the weekend? 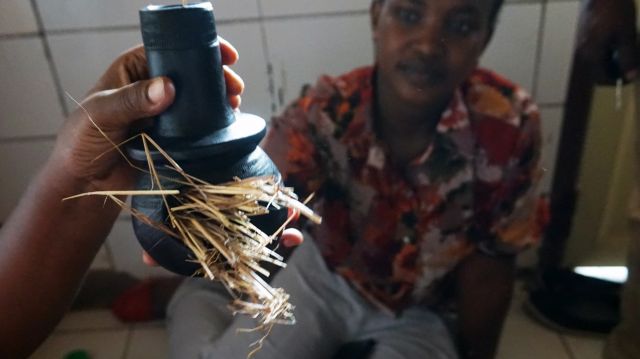 Inside a small ceramic pot, incense-like sticks smoldered and smoked. That smoke was then funneled into the other gourd, the one with the fresh milk, and then topped with the woven top. They passed us the gourd again, and we, each, in turn, removed the top, let the smoke pour out over us as we drank. Smoked milk. We looked at each other. We laughed. Another drink.

Later in the back of the truck, as we bounced and rocked toward the hotel, we talked about how we each got there, a television producer and an international journalist drinking smoked milk at a milk bar outside a crowded market in Kigali. What could our paths have had in common (besides, it turned out, a mutual friend in New York)?

We both asked ourselves “Why not?”

I say that knowing “Why not?” is far from the perfect approach. It doesn’t have legions of supporters. It’s not Stoicism. It’s not even that practical. But it works.

“Why not?” comes with an air of nonchalance. It lacks the contagious positivity of saying yes to invitations and opportunities. Rather, it’s that summery sense of having nothing better to do than eat popsicles and stay up late. I know it’s the right question because I delight at what answering it means. If it means a late night with more popsicles, well, why not?

When I’ve found myself with opportunities, though, “Why not?” has been the deciding vote, and it’s made so much of the difference. After the rationalizing and budgeting, after conversations and long walks, I’ve returned to “Why not?”

“Why not?” got me to the south of France. It edged me to Rwanda. It kickstarted a weekly dinner party. With those, and many smaller examples, I’ve had the best nights, with great people. I’ve gotten lost. I’ve missed trains and buses and a plane. For better or worse, I’ve been moving. “Why not?” keeps me in motion.

For me, “Why not?” is not about a lack of good options. It’s about loosening that tight grip resistance has over me. Do I have a good reason to stay home? To stay put? To stay in it? To not try?

“Why not?” is an invitation. It’s encouraging. It’s accepting. It’s teasing. It’s a conversation.

But unlike “Say yes!” – which I’ve been a fair weather fan of over the years – “Why not?” isn’t a panacea. It doesn’t make things perfect. It can be countered, and should be. Sometimes there are great reasons I shouldn’t do something.

“Why not?” spend a summer at a cooking program with a roach-infested dormitory? I can think of a good reason.

“Why not?” go to the DRC with its rash of kidnappings? I can think of a good reason.

By asking “Why?” as a regular follow-up to a statement, one can dig, and dig, and unearth some truth.

“Because you sense an audience connecting with your work.”

“That connection validates the effort, and… uh… I guess it makes me feel worthwhile, too.”

In a similar way, asking “Why not?” regularly tells me something about my resistance.

“Why not go out dancing?” Well, fear of rejection and looking ridiculous, mostly, but once I get past that, “Why not?”

“Why not strike up a conversation in another language?” Well, do I have enough words? But even with 10 in Kinyarwanda, I made a security guard laugh.

So, it’s a regular fight because it’s easy to resist new ideas. It’s easy to do what I’ve done before. It’s easy to need a reason, and let that need stifle action.

But then, I wonder…

… and I acknowledge the resistance, or I go beyond it.