For the first dinner party, I killed a rooster.

This was the first time I’d killed an animal. I have tried on many different eating ideologies over the years, and whether or not to eat animals, which animals, and with what frequency to eat them are the usual variables. In the relative obscurity of a big city, it’s easy enough to have these ideas without much struggle, and killing an animal is never part of that equation. I can buy the best produce. I can shun mass production. Any qualms I have about the treatment of the animal that was killed to be eaten can be assuaged with the amount of grass they had to walk and snack on. It’s all taken care of for me. But when that distance between the animal and me evaporated, I had to face up to my inconsistencies.

To me, eating meat should be thoughtful, not automatic. If possible, it should happen in groups (at dinner parties!), with an appreciation toward its preparation. But as my foot kept the rooster pinned to the ground, and I angled it so its throat would be over the floor drain at the back of the restaurant, I realized I hadn’t tested my beliefs before. To be serious about cooking means an understanding and an acceptance of what I’m cooking. Meat ends up an ingredient, but before that, it’s a live animal, and that’s worth considering. To be squeamish or unwilling to take part in its preparation, but to somehow be unfazed with cooking it is an inconsistency I wasn’t okay with, so, through squawks and its final resistance, I killed a rooster and helped to prepare it for our dinner party.

Prepping for a dinner party in a restaurant during lunch service with an executive chef is a world away from rooting through a farmers market and coming home to quietly panic in the heat and solitude of my one-bedroom apartment. Still, the end result is the same: making food for people to share together. We still arrange the table. We still play with napkin designs. Now, there are kids eating earlier, adults eating later, and the evening is capped with a dance and gymnastics performance. Still, the process is joyful, and what a dinner that first dinner was, with seven courses and many types of spices and sauces all imagined by the chef over a few hour period. I shouldn’t compare my own fledgling efforts with cooking and hosting to his, since he has 18 years of professional experience, but I found myself wondering at the timing of it all, how to conjure up flavors over high heat, make spur-of-the-moment adjustments, and keep an overall command of the dinner in mind. 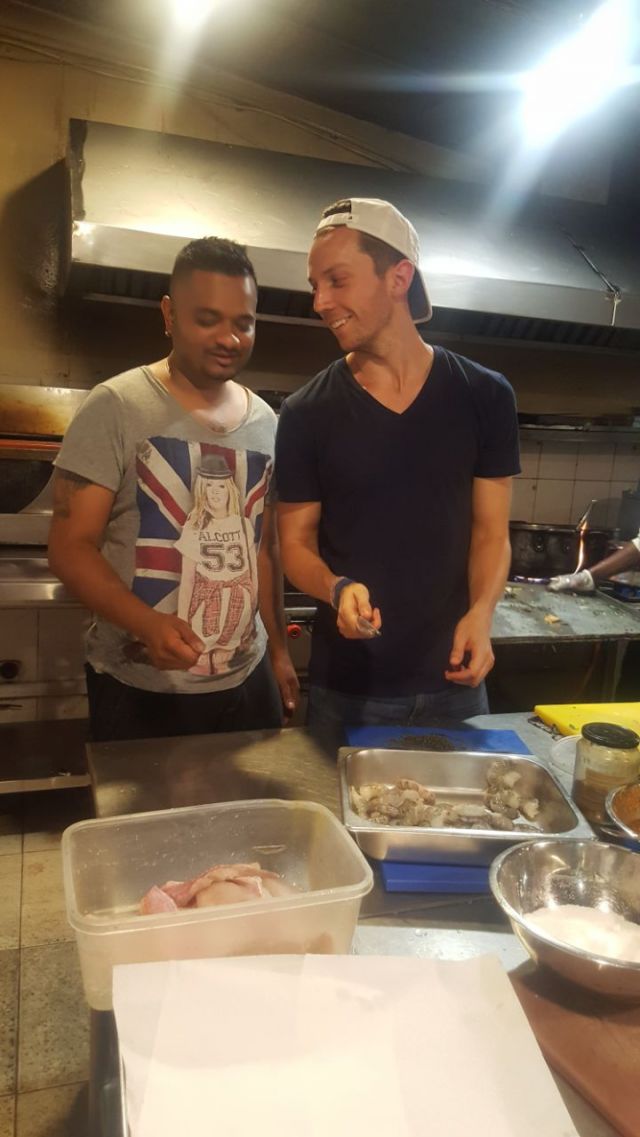 Preparing for the second dinner was more hands-on, and less idyllic. The second time we were in the kitchen together found him exerting his power over my inexperience. I was in his kitchen. I fetched the onions, and peeled them, under his mocking gaze. I stirred and scraped the sauces in the pots, the back of my hands sweating in a way I hadn’t felt since going to a dance with my girlfriend in 7th grade. He tested me, ordering me to take out three chili peppers – or was it four? – from the creole sauce. There had been four, but he only put in three. Pay attention, he said. I had. But there was plenty else to scrutinize. Everything was fair game. It’s easy to play cook at home away from it all. It’s not better, but it is easier, but I wasn’t tempted to hide.

Amongst more experienced people, my efforts invite ridicule. I don’t peel onions as fast as a trained kitchen staff does (and rarely have occasion to peel 20 onions for my weeknight meals). I still have fundamentals of taste and technique to learn, even as I try to reach upward toward competency, but I won’t learn from the memoirs of chefs past. I’ll learn from the sweaty palms and shaking hands and near-misses. The alternative? Doing what I’ve done. I want to get better, each day. I don’t know if progress has to mean pain, but there is a correlation.

For good measure, his wife takes equal pleasure in deriding me for my French efforts, calling it “special” and “Belgian” – shorthand for an unpleasant (at best) accent, and refusing to offer constructive criticism. Her daughter wore a shirt with “Samedi” written on it, and she was surprised I knew the days of the week. She grew up in a country with French as one of two official languages, and prefers it to English for its elegance. That my ugly duckling first steps aren’t graceful is no surprise. That she’s amused is fine. Progress doesn’t have to mean pain, but with learning languages, embarrassing missteps are necessary.

Both husband and wife play in arenas where they’re comfortable. I am finding confidence in growth.

I came here with an idea of how this summer would go, and it was based on things I am good at. In my first few days, I wrote a sample schedule of how an ideal day would go, and dreamed up the perfect balance between baking and video production. Along the way, though, new projects came up, new needs to address, new products to introduce, and I became less interested in the self-serving plan of what I wanted to get out of this summer, and more interested in what (if any!) value I could bring to a team, what holes I could fill, what efforts I could set in motion. Now, we’re developing tours and helping with the launch and marketing of a tour company. We travel around the city, meeting indigenous potters, banana farmers, rising artists, established designers, and women’s cooperatives. We visit suburbs and villages. With thoughts toward a half day’s worth of entertainment value and points of historical interest, driving routes and snack stops, we shape the experiences to make this city more accessible. It is creative, and new. 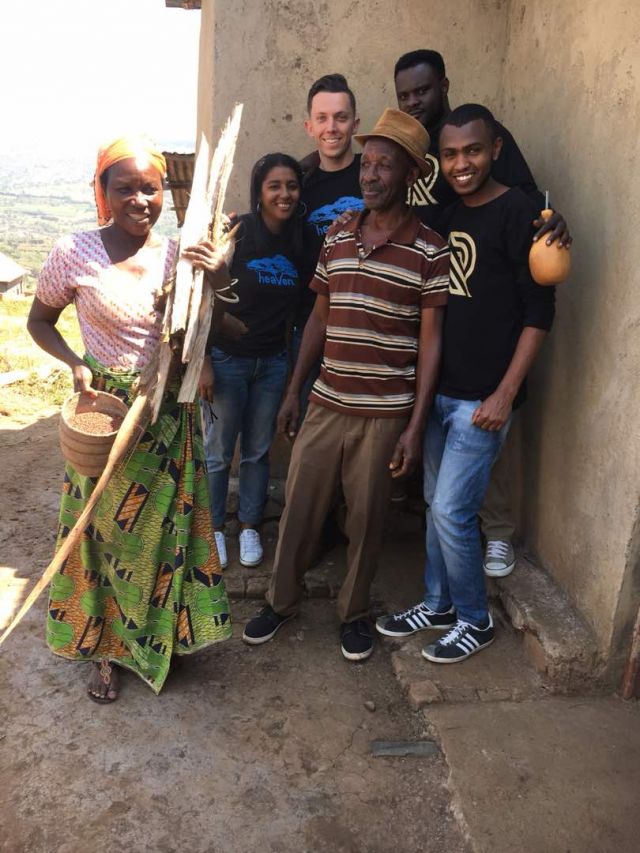 I’m halfway through this summer adventure, and part of the way to understanding what it’s all been about. So far, it is less about carrying over the creative momentum from last year’s book. It’s more about being in this situation, seeing unfamiliar tasks to completion, staying in conversations with developers or non-profit founders or students or front desk agents or former Obama appointees, and not fighting dinners that always seem to last two hours. It’s also about eating a lot of goat.