On that particular weekend, we had a day off, and on that day we’d gone into town, delighted to explore more of the Ecuadorian coast, to hike, and to drink fresh fruit smoothies from plastic baggies. 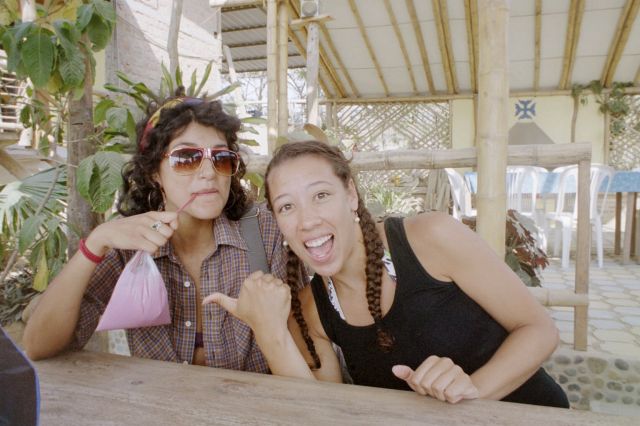 We were a group of teenagers, volunteering for part of the summer at a conservation and community project. Our days were a combination of painting murals, teaching English, and taking a small boat onto the water to track migrating whales. Our nights were spent with our host families, eating, talking, playing music. 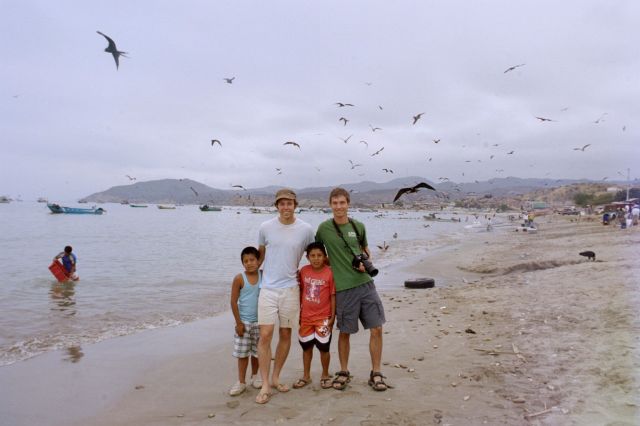 When we got on the bus after a day of bagged smoothies and coast-exploring, we saw there wasn’t room for us to sit together. We split up, finding space where we could, introducing ourselves to teenagers and mothers and families, and taking seats for the thirty-minute ride back to Machalilla, the village we were staying at for two weeks on the coast of Ecuador.

As I took my seat next to a boy on the bus, we started to talk. I explained a little bit about what this very loud group of far-from-fluent foreigners was about, and he told me he was on the way to visit his girlfriend’s family. He’d take the bus for two hours, join them for dinner, stay and talk for a while so the family could get to know him, and then he’d get on the return bus for another two-hour journey home. He’d do this every few weeks for as long as it took.

For him, in that moment, and in his life, there wasn’t.

Late last summer, I was walking through a grocery store in Colombia, and I started to think about that boy again, because as her parents walked behind us as I fumbled through the dairy section, doing mental gymnastics about making breakfast for four days for maybe two people and wanting to grab ingredients quickly but at the same time resisting the ever-present urge to luxuriate in the joy of international errand-running because very little about travel for me surpasses being able to compare how daily chores work in other places, like when you can’t get cold medicine on Sundays in Montpellier or how shelves are wider and deeper in Rwanda yet the items are not laid out in anyway that justifies the space they are given and how some post offices in Kenya are also their DMVs, and wanting to look at the whole leg of pork next to the unrefrigerated eggs because you don’t actually have to refrigerate eggs if the collection process is different than it is here in the United States and so now I’m thinking about collecting eggs, and if a leg of pork is too much for maybe two people, and her parents are catching up to me and I realize I may be setting up their understanding for what Americans do in grocery stores and so with the weight of a country’s shopping tendencies on my shoulders, I grab eggs, sausage, some onions and butter and make my way toward the checkout.

With my groceries and a fumbled Que les vayan bien I stumbled out of their car and back to my AirBnB. Though not a bus ride, it was certainly a time to overthink the impression I’d made, and to wonder about the next day and dinner and time together. Because for that boy on the bus, the dinner he spent so much time on the bus for was about spending that time together, and whether that time is spent over food or wandering the aisles of a supermarket, it’s about how we get to know one another, and the actions we each take. It may seem one-sided that the boy had to travel two hours by bus, but the invitation was extended, just as her parents could have stayed in the car but instead chose to come in and wander around with us. Or at least, near us.

It’s not all grand gestures and two-hour bus rides; beneath it is a give-and-take that is part of the conversation. 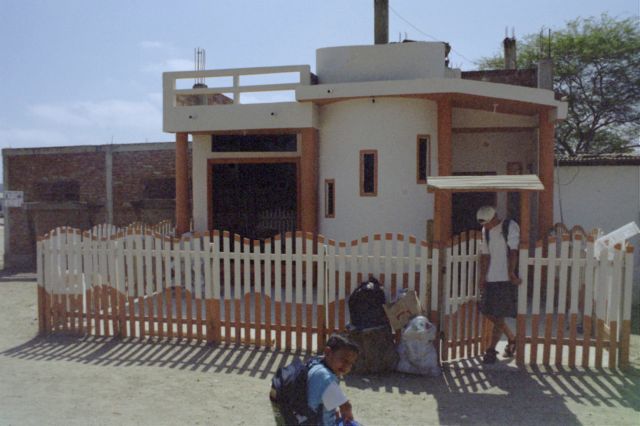 In Machalilla, I found out my host mom had never had pie before. This was about a year or two into my affair with pie, and this was a serious affront to my burgeoning pastry sensibilities. Notwithstanding the lack of a recipe or proper equipment, I told her we’d make a pie with whatever fruit she wanted, thinking I knew enough that I could make do.

Then she said pineapple, a fruit with which I’d never baked.

So, a pineapple pie. Without a recipe. Using an oven without legible numbers (and in Celsius). And it turned out edible. There was a party, and we served pineapple pie paired with Coca-Cola served from a 3-liter bottle into those little paper cups that you probably last used swishing out mouthwash at your dentist’s office, and there was dancing.

The access to recipes in books and the internet can be paralyzing, and this pie-making exercise was a reminder that as much as baking is a science, if you get the basics down right, you’ll get something edible, something that can be shared, and it was all of those things.

Plus, it had pineapple.

I don’t remember whose idea it was, but I ended up translating my favorite peach pie and flakey butter crust recipe into Spanish for her mom (here’s a debate I am open to having with whoever wants to have it: when writing ‘Pie’ in Spanish, is it better to write Pay so it’s written in a Spanish way that creates the English pronunciation, or Pie like it’s written in English, even though that means foot in Spanish?), and over a weekend in October, we made it together. “Together” might be a stretch, since the dough was already made when I arrived, and I mostly supervised the filling and the golden-browning of the crust in the oven. Even with the recipe, it was made into something else, a dough from her experience and the filling under my watchful eye, once again something less science than shared.

Then, the next morning we returned to the apartment to find another peach pie cooling on the counter.

In two weeks, I’m going to Bogotá for a month, and it has me thinking about parallels, those moments from the past that, as idyllic as they are isolated, come to seem more meaningful as similar moments register on the radar again (also, I promise I don’t ascribe cosmic significance to every pie I’ve ever made).

Maybe these parallels are nothing more than drawing a line between pairs of silly, light, fun, fleeting moments.

Or maybe these parallels come from putting yourself in a position, with whatever your interests of the day are, or wherever the things and the people you love take you, to be happy in as many of those fleeting, fun, light, silly moments as possible.