I was tired and I didn’t want to go.

The day after 12 hours of driving through a safari park filled with hippo sightings, cooped up kids and potholes that stressed the axles of the Landcruiser Prado and the core for those lucky enough to be sitting in the middle seat left my body complaining. So when I heard we would need to take one of the country’s infamously cramped minibuses for our weekend away to Musanze to hike up a volcano, the buses which take off from the infamously crowded bus station in Kigali, the one which two friends saw and bailed on because of the number of people and the grabbing hands and the tense air, I hesitated. Did I have the energy to sprint to the bus station and figure out the schedule and sit cramped for another three hours? I was tired, and really, why not take the weekend off?

Then she said she and her boyfriend and their friend were already at the bus station and the bus left in twenty minutes. I was wrapping up a conversation with the owner, the person responsible for allowing me to have this summer that I am having, and now I had a decision. To bus, or not to bus? To go, or not to go?

I threw underwear and my camera in my backpack, tied my running shoes together, grabbed a moto taxi to Nyabugogo, and held on tight. I arrived in eight minutes. I walked from one end of the bus park to the other before receiving a message that the original bus was too late and we had another and I had to be there quick. With two minutes to spare, I found her and we boarded a bus with seven rows, each row with four seated across, and sat down in the very back. Then we were off.

It took a sprint to pack and jump on the taxi and find the bus. It was a push. But the warnings I had from everyone about motos and the bus park and the bus seemed to me to be exaggerations. Or single experiences extrapolated to warnings. Like so many things, your experience may vary.

We sped around winding corners and headed into the hills. 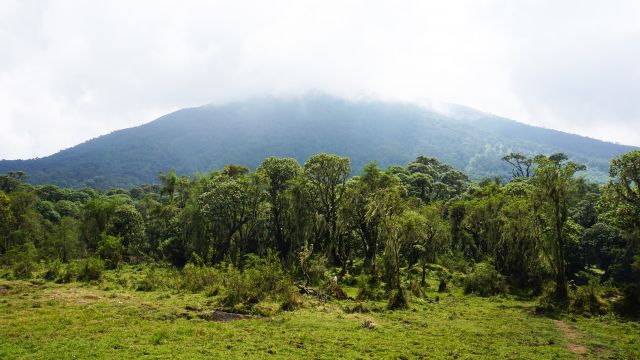 The four of us exchanged a look. We were ready to hike up to the crater lake of a volcano. We hoped to be lucky enough to see gorillas on our hike up, as some other hikers had said we might, but we knew we hadn’t paid for the permit, and even if we saw the gorillas, our time would be limited. Regardless, we wanted to try our luck, knowing it was certainly cheaper to go for a hike than pay the $1500 for the permit.

“We’re seeing a family that has 12 gorillas.”

Later, she’d amend that to 13, because of a newborn gorilla, just three days old.

There was some mistake. Instead of our crater lake hike, we were going to see a family of gorillas. At each turn, each time we expected our luck to run out, we kept moving forward. We got lucky. The closer we got, we kept seeing signs that pointed toward our original hike, and we didn’t think we’d possibly keep this going… but we got lucky.

But like most lucky situations, you have to put yourself into a position to be lucky. Saying fuck it and jumping on the back of the moto-taxi, because… Why not?

The trail got steep, but it still had trail-like qualities. Others had passed that way before, on their way up to another volcano. Then, we stopped. The guard started slicing through the brush with his machete. Our guide put on an extra pair of pants. Then she asked if we had gloves. Not only did I not have gloves, but no pants. I wasn’t prepared for the wild nettles, thorns and terrain. I was wearing basketball shorts and long dress socks.

She looked me up and down and said, “you’ll survive.”

And off we went, not giving a second thought to the trail we’d come here on because the uneven mountainside with its many interesting ways to inflict pain (stinging and stabbing and slipping) kept us focused on each footstep in front of us.

Part of the adventure was the not knowing. How were we actually going to make it up this dense thicket of plants and vines that seemed to actively dislike us? How many times could my shirt snag on thorns before tearing? Would we even find gorillas?

Then after an hour and a half of fighting through brush and brambles, thorns and fallen trees, we took a break. We ate our limp tomato and cheese and white bread sandwiches. We shared one of the three waters we’d brought on our hike. As we caught our breath, we were told to leave our backpacks where they were because the gorillas were just ahead.

There they were. Not quite gorillas in the mist (thought the volcano across the way, the one we should’ve been hiking up, remained shrouded, so we were mist-adjacent), but gorillas snacking, gorillas napping, gorillas playing and tumbling and roughhousing. Gorillas watching us as we watched them.

How do we take it all in? Seeing the 5th biggest silverback of the 380 mountain gorillas? A newborn? The bloodying hike up? The absolute fortune to be in this situation to begin with? How do we get to a moment like this from a day that started another way, and for a weekend that almost fell apart? These and a thousand other thoughts swirled around, and then melted away, as we enjoyed the moment in which we had found ourselves.

Then, our hour was up, and we said goodbye and began our trek down.

The scent of smoldering piles of eucalyptus (used to make charcoal) greet us as we exit the national park and head back through farmland and villages, past crops and kids and houses. The rain starts, the sky’s palette muted. The road back is rocky, the Landcruiser scrambles our insides, and we smile.

On the bus back to Kigali the next morning, I sit apart from our group. The lady to my right has fallen asleep, but not before offering me a bite of her bus stop corn-on-the-cob. I listen to podcasts in Spanish, but the details of the weekend stay with me. We woke up each morning to the warbling of the guest house’s resident turkey. The guest house, while far from perfect with its occasional water and power and internet outages, afforded us moments we loved. We were greeted by and took part in a traditional dance performance. We had dinners underneath the commanding silhouette of a volcano as a dozen locals ate lamb stew, drank Ugandan gin, and shared with each other stories of what they’re grateful for, all while allowing us to be there and to share in a fire that alternated between a comforting roar and an eye-burning billowing smoke cloud. 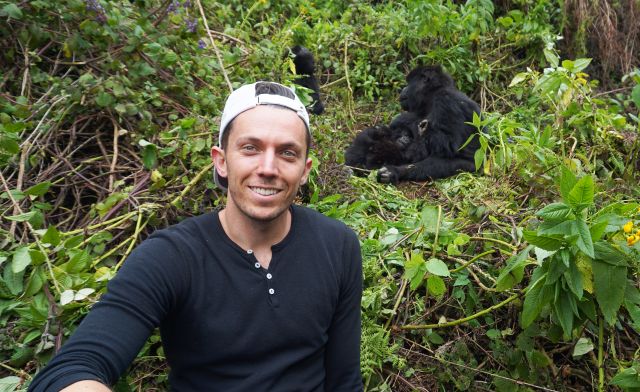 I have a trip in a few days, the following week, and one more before work begins. Even as planning for those continues, and even as goodbyes begin to outnumber greetings and introductions, the current trip keeps finding ways to absorb and overwhelm, sneaking in like light leaks in a film camera whose lens is focused too far down the road, making indelible impressions on these last days here.