The buses line the Mombasa streets at night, engines running and exhaust pouring out, a thrumming, pulsing presence for blocks and blocks on end.

People swarm to them; passengers, vendors, employees. The bus operators hawk overnight journeys to Kampala and Nairobi and Dar-es-Salaam. Vendors sell water and peanuts and electronics to grabbing hands reaching from dark windows upon high. These are the long-haul buses, each idling in front of a storefront branded with the same name: Crown, Spanish, Coast, Modern Express (the Crown bus I took offered as one of its perks “bottled water” so I’m not sure where that puts it in the line-up of great Kenyan buslines). There aren’t bus stalls. There’s not a display with the departure times. What you need is right in front of you.

Past these larger buses are the smaller local ones. They seem to compete less on comfort than on the allure of pop culture cachet (buses painted to look like Allen Iverson, marijuana, and Britney Spears angled hard for my business) and flashing neon lights.

Still, it is easy enough to slip by unbothered, and chasing anonymity is one reason I decided on this weeklong trip to Kenya. Helping out in a hotel has been a delight, and I’ve met people there who have given me so much, but as an introverted person, knowing I only get an hour each day without constant interaction became a challenge. Now, even among the chaos of cities like Nairobi and Mombasa and on 10-hour bus rides shoulder-to-shoulder with new moms and sweaty attendants, I can remain quiet.

Mombasa is winding alleyways in its old town, balconies made of teak that are falling apart, stray cats chasing each other near the fish market, and cracked buildings sporting fading hues of yellow and brown and coral. It is its new town, painted entirely blue and white. It is Fort Jesus, a Portuguese fort turned Arabic slave center turned British prison turned historical site. It is streets with sidewalks of cement bricks, and sidewalks of dirt and debris and piles of trash; often, these line the same street.

He found me in the way Lonely Planet advises against – by approaching me on the street outside of Fort Jesus, offering guiding services. He said he was a volunteer with the government, and that instead of charging sixty or seventy dollars I could pay what I thought he was worth when the tour of Fort Jesus and the Old Town of Mombasa was over.

Plus, he had a lanyard.

Throwing caution to the wind (and feeling comforted by his lanyard), I accepted and he led me past hundreds of students to the Fort’s entrance, each group in different uniforms that were less of uniforms in the sense that they were rigid and all the same and more in the sense that the kids wore regular clothes that were all uniform. Sometimes they wore red gingham shirts. Sometimes pink blouses. Some had blue pants. They looked comfortable enough, or as comfortable as junior high-aged kids can ever look, as they trudge past displays of ancient pottery, scuffling their shoes. 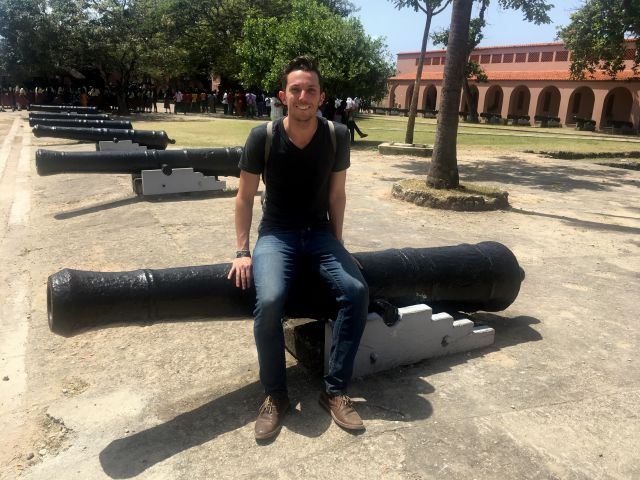 In between factoids about the military strategies of the Portuguese (short-sighted) and the skepticism of the Arabs (they were fearful the Portuguese had poisoned the fresh water well and insisted on building a second well, but it wasn’t properly sealed and saltwater seeped in rather than just have one person test the first well which catches rain water to this day), we talked tours. This summer, I’ve developed cultural city tours throughout Kigali, and that’s my sum total experience (other than going on a few myself), but I tried to meet him where he was, with the little bit I know. We talked about TripAdvisor as a tool for finding guests, and for becoming known as a local expert.

Then, he suggested a deal. I help with his TripAdvisor and other social media, and in turn, should his guiding become a business, I’ll get to be a part of it.

Now, so much of this depends on him, but from what I experienced, he is knowledgeable and affable and well-connected. To the extent I can help in some way (what’s the opposite of a get-rich-quick scheme?), shouldn’t I? He’s out there doing the work. I have my doubts if I’m any good at the work I’ve been doing this summer, this amount of designing and developing and producing and advising, but I’m here doing it. To balance out those doubts, I have some small hope that what I’m learning could help me become more location-independent in the future, so if I can practice it in a way that also benefits someone… then why not?

The openness that I began the working part of this trip with seems to have carried over to the part of the trip that was supposed to be fun (and solitary!), but isn’t working with interesting people the goal?

Isn’t that the fun?